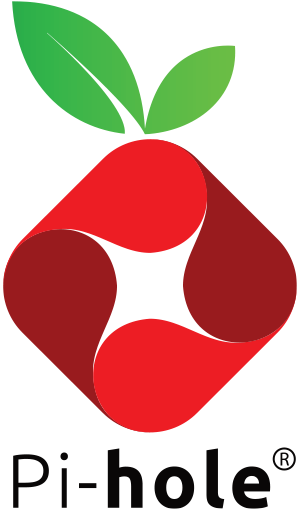 A Docker project to make a lightweight x86 and ARM container with Pi-hole functionality.

This container uses 2 popular ports, port 53 and port 80, so may conflict with existing applications ports. If you have no other services or docker containers using port 53/80 (if you do, keep reading below for a reverse proxy example), the minimum arguments required to run this container are in the script docker_run.sh

If you're using a Red Hat based distribution with an SELinux Enforcing policy add :z to line with volumes like so:

Volumes are recommended for persisting data across container re-creations for updating images. The IP lookup variables may not work for everyone, please review their values and hard code IP and IPv6 if necessary.

You can customize where to store persistent data by setting the PIHOLE_BASE environment variable when invoking docker_run.sh (e.g. PIHOLE_BASE=/opt/pihole-storage ./docker_run.sh). If PIHOLE_BASE is not set, files are stored in your current directory when you invoke the script.

Automatic Ad List Updates - since the 3.0+ release, cron is baked into the container and will grab the newest versions of your lists and flush your logs. Set your TZ environment variable to make sure the midnight log rotation syncs up with your timezone's midnight.

There are multiple different ways to run DHCP from within your Docker Pi-hole container but it is slightly more advanced and one size does not fit all. DHCP and Docker's multiple network modes are covered in detail on our docs site: Docker DHCP and Network Modes

There are other environment variables if you want to customize various things inside the docker container:

Here is a rundown of other arguments for your docker-compose / docker run.

Installing on Ubuntu or Fedora

Modern releases of Ubuntu (17.10+) and Fedora (33+) include systemd-resolved which is configured by default to implement a caching DNS stub resolver. This will prevent pi-hole from listening on port 53. The stub resolver should be disabled with: sudo sed -r -i.orig 's/#?DNSStubListener=yes/DNSStubListener=no/g' /etc/systemd/resolved.conf

Once pi-hole is installed, you'll want to configure your clients to use it (see here). If you used the symlink above, your docker host will either use whatever is served by DHCP, or whatever static setting you've configured. If you want to explicitly set your docker host's nameservers you can edit the netplan(s) found at /etc/netplan, then run sudo netplan apply. Example netplan:

Note that it is also possible to disable systemd-resolved entirely. However, this can cause problems with name resolution in vpns (see bug report). It also disables the functionality of netplan since systemd-resolved is used as the default renderer (see man netplan). If you choose to disable the service, you will need to manually set the nameservers, for example by creating a new /etc/resolv.conf.

Users of older Ubuntu releases (circa 17.04) will need to disable dnsmasq.

The primary docker tags are explained in the following table. Click here to see the full list of tags. See GitHub Release notes to see the specific version of Pi-hole Core, Web, and FTL included in the release.

The standard Pi-hole customization abilities apply to this docker, but with docker twists such as using docker volume mounts to map host stored file configurations over the container defaults. However, mounting these configuration files as read-only should be avoided. Volumes are also important to persist the configuration in case you have removed the Pi-hole container which is a typical docker upgrade pattern.

Do not attempt to upgrade (pihole -up) or reconfigure (pihole -r). New images will be released for upgrades, upgrading by replacing your old container with a fresh upgraded image is the 'docker way'. Long-living docker containers are not the docker way since they aim to be portable and reproducible, why not re-create them often! Just to prove you can.

Why is this style of upgrading good? A couple reasons: Everyone is starting from the same base image which has been tested to known it works. No worrying about upgrading from A to B, B to C, or A to C is required when rolling out updates, it reduces complexity, and simply allows a 'fresh start' every time while preserving customizations with volumes. Basically I'm encouraging phoenix server principles for your containers.

To reconfigure Pi-hole you'll either need to use an existing container environment variables or if there is no a variable for what you need, use the web UI or CLI commands.

Here are some relevant wiki pages from Pi-hole's documentation. The web interface or command line tools can be used to implement changes to pihole.

We install all pihole utilities so the the built in pihole commands will work via docker exec <container> <command> like so:

The webserver and DNS service inside the container can be customized if necessary. Any configuration files you volume mount into /etc/dnsmasq.d/ will be loaded by dnsmasq when the container starts or restarts or if you need to modify the Pi-hole config it is located at /etc/dnsmasq.d/01-pihole.conf. The docker start scripts runs a config test prior to starting so it will tell you about any errors in the docker log.

Similarly for the webserver you can customize configs in /etc/lighttpd

NOTE: After initial run you may need to manually stop the docker container with "docker stop pihole" before the systemctl can start controlling the container.

DNSMasq / FTLDNS expects to have the following capabilities available:

This image automatically grants those capabilities, if available, to the FTLDNS process, even when run as non-root.
By default, docker does not include the NET_ADMIN capability for non-privileged containers, and it is recommended to explicitly add it to the container using --cap-add=NET_ADMIN.
However, if DHCP and IPv6 Router Advertisements are not in use, it should be safe to skip it. For the most paranoid, it should even be possible to explicitly drop the NET_RAW capability to prevent FTLDNS from automatically gaining it.

We have noticed that a lot of people use Watchtower to keep their Pi-hole containers up to date. For the same reason we don't provide an auto-update feature on a bare metal install, you should not have a system automatically update your Pi-hole container. Especially unattended. As much as we try to ensure nothing will go wrong, sometimes things do go wrong - and you need to set aside time to manually pull and update to the version of the container you wish to run. The upgrade process should be along the lines of:

Pi-hole is an integral part of your network, don't let it fall over because of an unattended update in the middle of the night.

Please report issues on the GitHub project when you suspect something docker related. Pi-hole or general docker questions are best answered on our user forums.